Associate professor in the department of electrical & computer engineering  Dr. Ambrose Adegbege and the undergraduate students in his lab are excited to share their research at the 2022 Celebration of Student Achievement. Dr. Adegbege’s general research agenda focuses on control engineering (referred to as controls), a multidisciplinary aspect of engineering that aims to drive a process to a specified value. His main research goal is to bridge the gap between theory and practice. According to Dr. Adegbege, his research is asking fundamental questions that you may not be able to answer right now, so you will be working on it for a couple of years because there aren’t clear answers out there yet.

One of his big-picture research visions include developing “greedy algorithms” so control systems will someday be able to run the quickest while also being the most energy efficient. He takes inspiration from the way the brain solves problems computationally using minimal energy while utilizing efficient methods simultaneously. He asks: can we try to mimic the way the brain is so efficient in computations in order to solve our problems in control systems engineering?

His advice for all students (whether you are interested in grad school or not) is to look for a vital research experience and once you are accepted, be productive. That’s how his students have been offered fully funded PhD programs. “If grad school isn’t for you, you will still leave having gained valuable soft skills such as management, communication, presentation practice and goal setting. These skills will no doubt help you in other aspects of your life, like finding a job. Give it a try.” 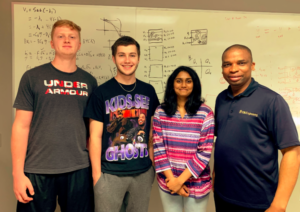 Here’s a bit of background info to help you contextualize the research the undergraduates are working with Dr. Adegbege. 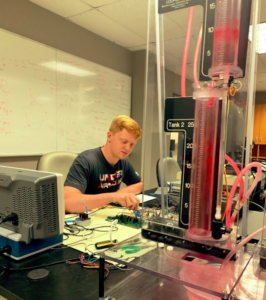 Frankie is using an all-analog approach (no digital). He’s doing some throwback work asking: do we have new technology to be able to revive & modernize the old analog approach (spoiler: according to Dr. Adegbege, the answer is yes because we’re approaching the end of digital computational power). His project is eliminating the need for conversion from analog -> to digital -> back to analog. This all-analog approach isn’t the most common since all of the computers we use nowadays are digital. To solve an optimization problem, Frankie uses a water tank/quad system for his research which replicates a lab pilot test bed of a chemical process (eg. water treatment systems) on a smaller and relatively cheaper scale.

I would say find something you’re passionate about to research because that’ll help you stay motivated.

Learning about how the recent Boeing 737 crashes happened. Things like this research could help prevent those things from happening. 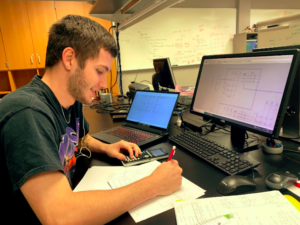 Matt is trying to determine: can we tweak the way an operational amplifier is built down at the transistor level and still achieve the same outcome as Frankie without using all those analog components? He is working to construct circuits similar to the way neurons in the brain are interconnected to speed up computations but on a smaller-scale. A handful of components in labs like Frankie’s use a lot of power so Matt is trying to build a tinier, more energy efficient version. With its smaller size, lighter weight, and no need for a backup power source, this can be something that can possibly be attached to a rover and sent to Mars.

When I first started, I had no clue what I was doing. Even now, I don’t really know what I’m doing sometimes. I have imposter syndrome but I feel like that’s pretty normal. You don’t have to be Albert Einstein to get a research position. Everyone gets those feelings and it comes with the territory. I’m just a normal student who emailed my advisor one day.

I finally got a taste of what the actual research process is like and it’s a lot different than what I thought. Like in industry, you don’t show up to work one day and start building a circuit. There’s a lot of planning and collaboration that goes into it.

In normal classes, you can just search up the answer because the problems are designed to have an answer but here, you’re building something. You don’t know if your circuit is going to work. It’s all trial and error, which I like. Here, you have to do a lot of the thinking and it forces you to think differently. 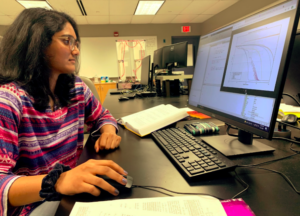 Nia’s research contrasts Frankie’s research because she focuses on the digital aspects of the project. After performing mathematical calculations and simulations, she will build a digital circuit. Her work uses analog to digital conversions from the sensors on the water tank system in the lab. As a digital system, she can then work with the data on a digital computer.

Don’t be too intimidated by the idea of research. Even if you feel like you don’t know anything, by the end of MUSE you will definitely have gained something. No matter where your starting point is, you can always jump into research at any point. And don’t feel like everyone else is much more prepared. Everyone is working on different things. You definitely have something to contribute.

I know a lot of people think about research as reading papers and all the jargon puts them off. But once you actually start to understand it, it’s really funny because then it becomes hard for you to explain the technical stuff because now you understand it at this level. It’s really interesting that people who think they don’t know enough eventually become at that level. I wasn’t expecting that.  I thought I would be trying to play catch up with everyone else but really everyone is working on their own cool, interesting and important projects.

If you are an engineering student and did something awesome you want us to know about, email us at: soengweb@tcnj.edu.