Nipun Majumdar, a senior mechanical engineering major at TCNJ, has won TerraCycle’s second annual Ernel Simpson Innovation Award for environmental innovation, complete with a $500 stipend to support continued work on this project. Nipun and his teammates, Sophia Vazquez and Vanni Roa, have developed a prototype to support sustainable desalination using solar power. As Nipun explains, “We are in the midst of a climate emergency, and among many other problems freshwater scarcity is looming in many countries around the world.” The desalination process, which converts seawater to drinking water, can be “environmentally disruptive,” due to its byproducts and  use of non-renewable energy sources, without designs like the one Nipun and his team have created.

TerraCycle, based out of Trenton, is a social-minded business seeking to eliminate waste through simple recycling platforms. Nipun feels “honored” to receive the award, particularly as it combines two of his areas of passion, sustainability and innovation. Envisioning the future, Nipun told us, “I believe this generation is tasked with re-innovating approximately 200 years worth of engineering to shape a sustainable future, and this award only motivates me further to work towards climate change and sustainability imperatives.”
Nipun is an attending member of the TCNJ Environmental Sustainability Council and an invited fellow of the TCNJ School of Business Innovation Fellows which currently consists of six students who advise, and pursue solutions for the City of Trenton for the purposes of economic development, city’s livability, and sustainability.
Nipun’s vision and passion for sustainability make it unsurprising that he was selected for the 2041 ClimateForce Antarctic Expedition in 2021, as one of 80 participants heading to Antarctica for ClimateForce’s Leadership on the Edge program led by Robert Swan, the first person in history to walk to both the North and South Poles. Nipun reflected: “my acceptance to the expedition was quite overwhelming. While the expedition is a fun travel experience, I am cognizant of the mission and my shared responsibility. I hope to leverage my experiences to be at the forefront of our fight against climate change by helping raise awareness, and by using the platform to push firms, and governments to prioritize climate action. Also, I may or may not interview a penguin.” 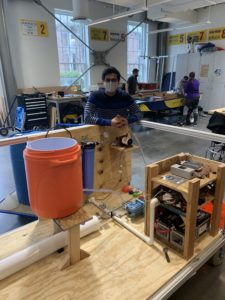