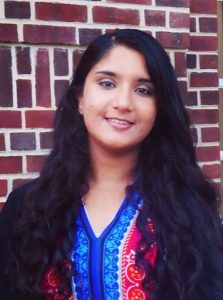 The School of Engineering is proud to congratulate senior Biomedical Engineering student Amulya Veldanda on receiving the 2017-2018 Stabile Scholarship from the Engineering Honor Society Tau Beta Pi. The award was created in 1998 in honor of former Emeritus R.H. Nagel, and is awarded to recipients based on academic standing, extracurricular activities, faculty recommendation, and their potential contributions to the engineering industry. Veldanda will receive a $2000 award to put towards her educational goals.

Veldanda is an active member of the TCNJ engineering community. She currently serves as the secretary for TCNJ’s chapter of Tau Beta Pi and is also the president of TCNJ’s Humanitarian Engineering club. In January, Veldanda will lead a group of students from this organization down to New Orleans to help with the hurricane rebuilding efforts. In addition to extracurricular activities, Veldanda spent the past two summers as a participant in the Mentored Undergraduate Summer Experience (MUSE) program. In 2016, she worked with Dr. Xuefeng Wei. According to Veldanda, the research focused on “computationally modeled neurons in the brain in order to investigate a possible reason for the therapeutic effects of deep brain stimulation”. This past summer, Veldanda continued to expand her research experience and worked with Dr. Christopher Wagner on how “the application of strain to stem cells potentiates their differentiation into tendon cells”. After she graduates, Veldanda plans earn her PhD in biomedical engineering. Congratulations Amulya!