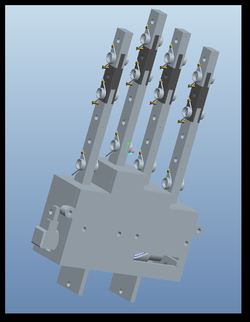 Currently, two types of prosthetic functional hands are available on the market: body powered and myoelectric prostheses. Body powered prostheses are actuated by prolonged gross body movements, and are generally limited to a single clasping motion. Myoelectric hands interpret electrical signals generated by the arm’s remaining musculature and translate them into a variety of hand motions and positions.  However, these devices are expensive and have a steep learning curve.  No successful “midgrade” prosthetic device, which incorporates multiple degrees of freedom while remaining affordable, is currently offered.  Therefore, a hybrid, pneumatically actuated prosthetic device is proposed. This project is a proof of concept study, which intends to show that multiple degrees of freedom can be incorporated successfully without myoelectric control and without unreasonable stress on the user. To achieve these degrees of freedom, five specific shoulder movements are translated into controlled movement of the prosthetic hand viaelectrical signal transduction.  This device is capable of two manually controlled and three electronically controlled degrees of freedom. The thumb and wrist can both be locked manually in two positions, while wrist rotation, wrist flexion, and a contour grip can be achieved using a pneumatic rotary actuator and pneumatic artificial muscles.